Chicagoland Gardening magazine published my article and pictures (written with the help of my boss, Mary) in their January/February 2008 issue. The article is under the Chicagoland Natives Section, and titled 'Native Plants to Attract Wildlife'. It is about trees and shrubs you can use in your landscape that are beneficial to wildlife, especially birds. 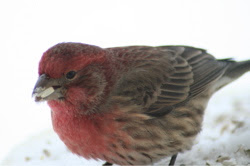 'Handmade 2.0' Published: December 16, 2007 in the New York Times, describes the movement to buy handmade (especially gifts) and the rise of the website Etsy, where people can buy and sell handmade items. The 'Do-it-Yourself' movement combined with old fashioned methods and some entrepreneurial spirit thrown in, and now modern crafters are using the internet to sell their creations, and even make a living from it.

The value of a site like Etsy is described perfectly in the article:

"It depends on people buying things... a throwback to the way consumption ought to be: individuals buying from other individuals. “Our ties to the local and human sources of our goods have been lost,” ... The idea is a digital-age version of artisanal culture — that the future of shopping is all about the past."

For a good example, check out my sister's Etsy store, www.redwickerbagdesign.etsy.com where she sells handmade reusable gift boxes, hand knitted scarves, and paper products made from Ellie Pooh Paper (Non-toxic, recycled paper made from elephant dung. Protects the elephants of Sri Lanka from poaching, and provides a revenue source for the local people).
No comments:

alternative to over-the-counter cough medicines.
Honey helps calm coughs by dissolving mucus and coating sore throats. Honey also has antioxidant and antimicrobial properties.
The study suggests that parents should consider honey “as an alternative to cough medicine for children over age 1.”
'Tame a Child’s Cough With a Touch of Honey' By Nicholas Bakalar Published New York Times: December 11, 2007
No comments:

An article in the New York Times this week had some great ideas for gifts to give gardeners. I agree completely with her advice:

'Don’t give cute presents to your gardening friends. Avoid stones engraved with the words Love or Peace. Instead, think about what’s practical.'

Does the holiday season fill you with dread?
Most of us I do not need more 'stuff', and would like to spend less money at the holidays and create less waste.
Wouldn't you like to spend more time at home with your family and less time shopping?

Ideas to save time and money that are good for the environmentArticles:
Jolly and Green, With an Agenda

The Problem With Christmas- Are you brave enough to say no to a high-stress holiday?
No comments:

More on What to Eat

The rules of thumb at the end are great, and good common sense for eating healthy.
Here are some of his suggestions:

Yes, you too can make homemade gravy!

The recipe for my homemade gravy was very much in demand this Thanksgiving. Click the link below to see the article I wrote on my adventures in gravy making.

One of my favorite authors, Michael Pollan, has explored many angles of the question 'What to Eat?' in his books and also his articles for the New York Times. His writings have opened my eyes to the reality of where my food comes from. 'The Omnivore's Dilemma' is a great read, interesting and informative, and I would highly recommend it.

Pollan's next book, which I am eagerly anticipating, will be “In Defense of Food: An Eater’s Manifesto.” Go to the authors website for a list of books and articles.

Here are some excerpts from my favorite articles:

"Americans have begun to ask why the farm bill is subsidizing high-fructose corn syrup and hydrogenated oils at a time when rates of diabetes and obesity among children are soaring, or why the farm bill is underwriting factory farming (with subsidized grain) when feedlot wastes are polluting the countryside and, all too often, the meat supply. For the first time, the public health community has raised its voice in support of overturning farm policies that subsidize precisely the wrong kind of calories (added fat and added sugar), helping to make Twinkies cheaper than carrots and Coca-Cola competitive with water. Also for the first time, the international development community has weighed in on the debate, arguing that subsidized American exports are hobbling cotton farmers in Nigeria and corn farmers in Mexico."

"A few years ago, an obesity researcher at the University of Washington named Adam Drewnowski ventured into the supermarket to solve a mystery. He wanted to figure out why it is that the most reliable predictor of obesity in America today is a person's wealth. For most of history, after all, the poor have typically suffered from a shortage of calories, not a surfeit. So how is it that today the people with the least amount of money to spend on food are the ones most likely to be overweight?

Drewnowski gave himself a hypothetical dollar to spend, using it to purchase as many calories as he possibly could. He discovered that he could buy the most calories per dollar in the middle aisles of the supermarket, among the towering canyons of processed food and soft drink. (In the typical American supermarket, the fresh foods--dairy, meat, fish and produce--line the perimeter walls, while the imperishable packaged goods dominate the center.) Drewnowski found that a dollar could buy 1,200 calories of cookies or potato chips but only 250 calories of carrots. Looking for something to wash down those chips, he discovered that his dollar bought 875 calories of soda but only 170 calories of orange juice."

"Eat food. Not too much. Mostly plants.
That, more or less, is the short answer to the supposedly incredibly complicated and confusing question of what we humans should eat in order to be maximally healthy. I hate to give away the game right here at the beginning of a long essay, and I confess that I'm tempted to complicate matters in the interest of keeping things going for a few thousand more words. I'll try to resist but will go ahead and add a couple more details to flesh out the advice. Like: A little meat won't kill you, though it's better approached as a side dish than as a main. And you're much better off eating whole fresh foods than processed food products. That's what I mean by the recommendation to eat ''food.'' Once, food was all you could eat, but today there are lots of other edible foodlike substances in the supermarket. These novel products of food science often come in packages festooned with health claims, which brings me to a related rule of thumb: if you're concerned about your health, you should probably avoid food products that make health claims. Why? Because a health claim on a food product is a good indication that it's not really food, and food is what you want to eat."

"Wendell Berry once wrote that when we took animals off farms and put them onto feedlots, we had, in effect, taken an old solution--the one where crops feed animals and animals' waste feeds crops--and neatly divided it into two new problems: a fertility problem on the farm, and a pollution problem on the feedlot. Rather than return to that elegant solution, however, industrial agriculture came up with a technological fix for the first problem--chemical fertilizers on the farm. As yet, there is no good fix for the second problem, unless you count irradiation and Haccp plans and overcooking your burgers and, now, staying away from spinach. All of these solutions treat E. coli 0157:H7 as an unavoidable fact of life rather than what it is: a fact of industrial agriculture."

A Touch of the Past

Why do we throw so much away?
When did we stop knowing where our food came from?
Why do we not know what we should eat to be healthy?
When did we as a society stop passing along the skills needed for self-sufficiency?

I want to learn these things again!
Join me as I learn how to: 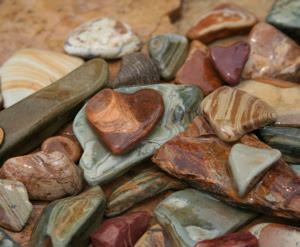 Welcome to my blog, my virtual journal, my ramblings on the things I find interesting. It's a big world, I trust there are people out there that take interest in the things that fascinate me.

I discovered the joys of blogging after setting up a blog for work, but found I had much more to say and share on many topics. I have never been successful at keeping a journal consistently, but the idea of being able to link to articles and sites I find interesting and add my photographs to illustrate my musings is very exciting.

This will be a blog about connecting with nature, delighting in the wild things of this world, and striving for a simpler healthy life.

What is A Touch of the Past?

Connecting with nature, finding joy in wild places, and living a simple healthy life is what 'A Touch of the Past' is all about.

You will find recipes, organic gardening tips, low cost/homemade alternatives for products, and you may learn something about the natural world.

Get The Latest Updates by Email or RSS

My Photographs can be purchased at www.rachelynn.etsy.com. Send me an email or add a comment and I will make it available for purchase.

Find My Cookbooks for Amazon Kindle

15 Easy Everyday Recipes for Vegetable Soups: Made From Scratch! (The 'Eat What You Grow' Series Cookbooklet)